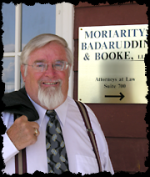 Speaker & Teacher: I have given presentations and speeches to numerous legal associations in Wyoming, Montana, Utah, and Idaho, and have been a teacher at the Trial Lawyers College in Dubois, Wyoming and at the Wyoming Trial School at the University of Wyoming in Laramie, Wyoming.

I am happy to share my long experience in trial law with others and enjoy sharing what knowledge I have acquired over my long career.

Brief Description of the Legal Career of Edward P. Moriarity

I graduated from the University of Wyoming School of Law in 1970, was admitted to practice in 1970, and have been a practicing attorney ever since. I began my legal career in Cheyenne, Wyoming with the firm of McClintock, Mai and Urbigkit in 1970, was named a partner in 1971, and practiced with that firm until 1974 when I moved to Casper, Wyoming to work with Robert Rose and Gerry Spence. Shortly thereafter Judge Rose was named to the Wyoming Supreme Court, and the firm of Spence and Moriarity was born. In 1978 we moved the firm to Jackson Hole, Wyoming, and the name was changed to Spence, Moriarity & Schuster and subsequently to Spence, Moriarity & Shockey. I had the honor of being the partner of Gerry Spence for over 30 years.

In 2004 I became the head of the present firm of Moriarity & Badaruddin PLLC, taking over the Spence, Moriarity & Shockey practice in Salt Lake City, Utah and adding additional offices in Wilson, Wyoming; Cheyenne, Wyoming; Three Forks, Montana; and Missoula, Montana.

Some of the cases in which I have been involved throughout these many years of practicing law and of which I am very proud are as follows:

I have been involved in many murder cases, several of which were death penalty cases, and none of my clients have suffered the ultimate punishment.

I had the honor of working with my partner Gerry Spence on the defense of Imelda Marcos, one of the more interesting and historic cases ever tried.

Gerry and I were invited and honored to go to London, England to conduct a mock trial of Lee Harvey Oswald with the prosecutor being Vincent Bugliosi, the prosecutor of Charles Manson. In the mock trial, we were allowed to use the actual exhibits from the Kennedy assassination, and the witnesses who testified were the actual witnesses to the assassination of President John F. Kennedy. I still have, and will always have, a vivid memory of the incredible feeling of holding the actual gun that killed President Kennedy.

In my early years, I did a lot of criminal work and enjoyed the day to day/hand to hand combat in the courts dealing with preliminary hearings, motions, and finally the jury trial. Now, I always like to have a couple of criminal matters in process because I know that most criminal cases, unlike civil cases, are resolved by a jury.

I had the honor and privilege of trying many cases with Gerry Spence and was with him during most of his most famous cases:

• $10,500,000 jury verdict against Kerr-McGee on behalf of the children of Karen Silkwood

• $4,000,000 jury verdict in a Utah medical malpractice suit which established a new standard for nursing care in that state

• Many product liability cases dealing with the safety of motor vehicles including making the seatbelts, the seats, the passenger compartments, the suspension systems, the brake systems, and the fuel systems safer. These cases were instrumental in making the motor vehicles in which our loved ones travel safer today, more roadworthy and more crashworthy. Looking back I am very proud of the work I have accomplished in this area and I wish that the American consumer of today was more aware of the important work many trial lawyers do to make the highways of America safe rather than being brainwashed by the worldwide insurance companies and their spokespeople.

• Acquittal of Sheriff Ed Cantrell in Rock Springs, Wyoming – he was charged with shooting an informant who was scheduled to testify before a statewide Grand Jury

• Gerry Spence and I tried many other interesting murder cases that ended up with acquittals for our clients including, but not limited to, a man acquitted for shooting his girlfriend’s lover, a women acquitted for shooting a person who shot at her children and tried to take her property, and a small young man who was accused of killing his co-worker at a state institution.

As I stated, I was very lucky to be Gerry’s partner and second chair for many cases. I learned how a great man thinks, and most importantly, I learned how a great man works. I have been taught that the key to representing people is hard work and preparation. Gerry has taught me, along with many other things, that hard work, long hours, preparation, and not leaving a stone unturned is the best and only way you can represent a client. If a client is willing to entrust you as a lawyer with his case, then you must be willing and able to do the very best job you can for that client.

Over the years I have also had the honor of representing many clients in cases in which Gerry was not the lead lawyer. In 1984, I achieved the largest wrongful death punitive damage verdict in Arizona, which was a record at that time. The jury awarded over $6,000,000 for the wrongful death of a beautiful young woman who was murdered by a person wearing a hotel uniform whom she let into her motel room. The case was important because it led to standards imposed by the hotel industry on its innkeepers that required guards on the doors so they could not be forced open but only open slightly, new key systems, and keeping a person’s room number secret.

I also developed a special interest and expertise in trucking cases; i.e. cases involving semis and other big vehicles regulated by the United States Department of Transportation (DOT). I have settled many trucking cases for figures far in excess of one million dollars. One case – prior to the confidentiality clause – involved a man driving a flatbed one-ton truck who was hit in the rear corner by a semi-truck driven by an unqualified driver who had a drug history. The driver should never have been hired, yet he was placed on the highways of America totally unqualified with a thirty-ton rig capable of injuring and killing many innocent people. The case settled for the policy limits of five million dollars. Since that time, I have prepared and ultimately settled many cases for a lot of money. Consequently, I am proud that I have helped make the highways of America safer for all of us.

Some Examples of Million Dollar Plus Confidential Settlements

• Confidential settlement in a wrongful death case again in New Mexico involving a pileup on I-40 that was among the largest settlements ever in New Mexico.

• Confidential settlement in a personal injury case in Idaho involving an accident at a sorority house at the University of Idaho that left my client a paraplegic.

• Confidential settlement in Miami, Florida involving the wrongful death of an eighteen year old in a car accident.

• Confidential settlement in a personal injury case in Nevada for an assault at a casino leaving my client a quadriplegic.

• Confidential settlement in Montana in a personal injury suit involving an explosion of a gas line.

• Confidential settlement in Utah involving the wrongful death and personal injury of a family involved in a truck/car collision.

• Confidential settlement in Washington involving the wrongful death and personal injury of victims of a shooter at Fairchild Air Force Base.

• Confidential settlement in several train/vehicle collisions in Utah, Illinois, Wyoming and Montana. I have also developed an expertise and special knowledge in railroad cases. These cases generally result in tragic deaths of innocent people even though the railroads spend a lot of money trying to convince the American people that the injured victims are the wrongdoers. Cases in this area have involved a family in Utah, a person in Illinois, and five teenagers in Douglas, Wyoming. I have been involved in many other railroad cases as well.

• Confidential settlement of a case involving a hospital that negligently collected blood contaminated with HIV and then permitted the contaminated blood to be given to a patient in the hospital resulting in the patient contracting HIV and dying.

• Confidential settlement against a drug manufacturer that sold contaminated medicine to a kidney patient resulting in an untimely death.

There have been several other civil cases that have resulted in confidential settlements in cases involving many other issues, including police brutality, discrimination, workplace injuries, oil field injuries, automobile accidents, motorcycle cases, malpractice cases, crane cases, and other cases dealing with heavy equipment. In all of our cases we have attempted to represent the little guy against the harm caused by corporate America.

Some Other Criminal Defense Cases of Note

Defense of an insurance agent in Idaho who was charged with fraud, forgery, RICO, inter alia – in 164 predicate acts. My client was not convicted on any of the charges.